Recent political debates over Muslim immigration and related issues have prompted many people to ask how many Muslims actually live in the United States. But coming up with an answer is not easy, in part because the U.S. Census Bureau does not ask questions about religion, meaning there is no official government count of the U.S. Muslim population. 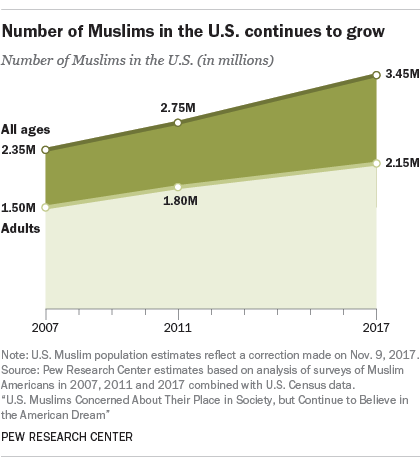 Still, based on our own survey and demographic research, as well as outside sources, Pew Research Center estimates that there were about 3.45 million Muslims of all ages living in the U.S. in 2017, and that Muslims made up about 1.1% of the total U.S. population.

Muslims in the U.S. are not as numerous as the number of Americans who identify as Jewish by religion, according to our estimate. At the same time, our projections suggest that the U.S. Muslim population will grow much faster than the country’s Jewish population. By 2040, Muslims will replace Jews as the nation’s second-largest religious group after Christians. And by 2050, the U.S. Muslim population is projected to reach 8.1 million, or 2.1% of the nation’s total population — nearly twice the share of today.

The latest estimate combines information from our 2017 survey of U.S. Muslims — which reported on the prevalence of Muslims among immigrants and other demographic groups —  with official Census Bureau data on the number of people in these groups.

Muslims are not evenly distributed around the country. Some metro areas, such as Washington, D.C., have sizable Muslim communities. Likewise, certain states, such as New Jersey, are home to two or three times as many Muslim adults per capita as the national average. But there are also states and counties with far fewer Muslims.

Click here to read the rest of the article.