In recent years a growing trend among many Muslims has been to make the claim that Jesus was a ‘good Muslim’[1]. Others have described him as ‘a prophet of Islam’. Their method has been simple: by mining the New Testament Gospels they have sought to show that Jesus fasted, prostrated when he prayed, gave to the poor, and performed a wide range of other Islamic practices. Some have even tried to claim that Jesus gave instructions about how to conduct oneself when on hajj.[2]

The question we want to address in this short essay is why stop with Jesus? Why not see if one can demonstrate that other famous literary or historical figures were also Muslims? It is in that light that we have settled upon one of the world’s most famous literary figures as a test case: we refer to none other than Winnie-the-Pooh. Literary giant,[3] poet in his own right,[4] screen star,[5]philosopher[6] and hero to millions of children,[7] could it be that the secret of Pooh’s success lay in daily submission to Allah?

The method we will apply to decide whether or not Winnie-the-Pooh was a good Muslim is the same that Muslim apologists such as Muhammad ‘Ata Ur-Rahim or Thomas McElwain have applied to Jesus. We will comb the two major works of sunnat al-ursine that have been transmitted to us for any clues that Pooh held Islamic beliefs or engaged in Islamic practices.[8] If enough examples can be found, then perhaps we can look forward to such works of erudition as The Muslim Pooh, Mysteries of the Bear, or The Gospel of Piglet springing forth from the pens of Muslim authors in years to come. Let us now turn to the texts before us.

2 .Is God to be found in Winnie-the-Pooh?

The hermeneutical key to reading Winnie-the-Pooh (forthwith simply WTP) and The House at Pooh Corner (THAPC) from an Islamic perspective is to begin by understanding where Allah is to be found within them. For if one was to read the two books quickly, one might end up asking ‘where is God?’ The answer is that Allah’s presence in these books is metaphorically symbolised by the figure of Christopher Robin. This kind of metaphorical device has a long tradition in Western literature and the symbolism can be easily demonstrated.

Let us begin with the map (WTP, xii-xiii) on which one can immediately see that Christopher Robin’s House lies in the East. What stronger clue could this be that the House is none other than the Ka’aba and Christopher Robin symbolic of Allah himself? (A clue to Pooh’s religion is also found on this map: in the small drawing on the left of the page, he is portrayed facing the Sacred House in the East). 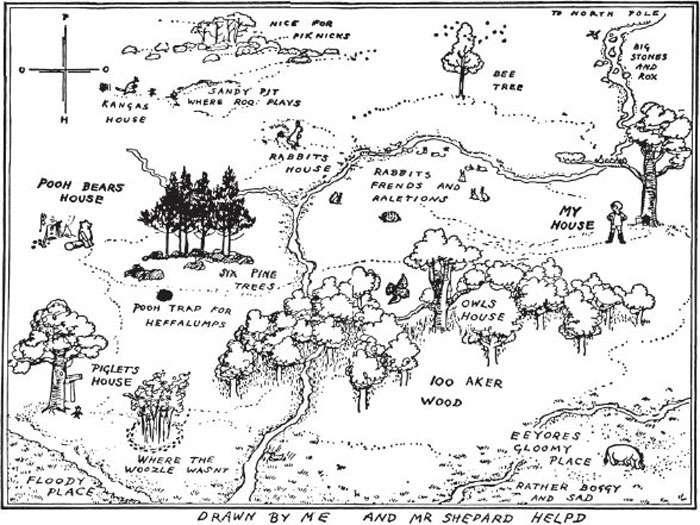 Furthermore, we are told that Christopher Robin ‘lived at the very top of the forest’, so high that ‘the [rain] water couldn’t come up to his house’ (WTP, 125). Christopher Robin is also portrayed as being omnipresent:

Christopher Robin had spent the morning indoors going to Africa and back.
(THAPC, 8)

Going to Africa and back in one morning whilst remaining indoors would be impossible for a mere human, however for Allah all things are possible. We also discover that Christopher Robin is omniscient:

‘Does Christopher Robin know about you?’ [asked Pooh]
‘Of course he does’, said Tigger.
(THAPC, 20)

It is implicit that Christopher Robin knows everything.[9] And so, in summary, Christopher Robin’s house is in the East, he is above the world, far beyond the reach of rain and weather, he knows everything, and can travel anywhere he wants in an instant. Thus his character symbolically represents God. Establishing the existence of this metaphor will help us as we explore whether Winnie-the-Pooh was a good Muslim. Click here to continue reading http://www.andybannister.net/was-winnie-the-pooh-a-good-muslim/