Muslims will be more than one-quarter of the Earth’s population by 2030, according to a study released today by Garrett Hubbard in USA TODAY. 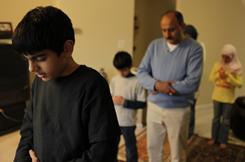 Umaid Qureshi leading an afternoon prayer for family members in their home in Herndon, VA., a suburb of Washington, D.C.

The number of U.S. Muslims will more than double, so you are as likely to know a Muslim here in 20 years as you are to know someone Jewish or Episcopalian today.

Those are among key findings in ” The Future of the Global Muslim Population,” the first comprehensive examination of Muslims, whose numbers have been growing at a faster rate than all other groups combined.

“We’re not surprised. Our mosques and schools are already overflowing,” says Imam Johari Abdul-Malik, outreach director of a mosque in Falls Church, Va.

The Pew Forum on Religion & Public Life analyzed statistics from United Nations data and census material from more than 200 countries and studies by 50 international demographers.

• Muslim immigration to the USA and Muslims’ share of all new legal permanent residents will continue to rise. Most of the immigrants will arrive from South Asia, the Middle East and Africa.

• Though 64.5% of U.S. Muslims today were born abroad, that percentage will fall to 55% as the number of native-born Muslims rises.

Just as now, about 3% of the global Muslim population will live in the world’s most developed regions.

In several northern and eastern European nations, the percentage of Muslims will near or pass 10%, raising their political and cultural clout, particularly in urban areas.

Ibrahim Hooper, spokesman for the Council on American-Islamic Relations, says, “We Muslims need to redouble our outreach efforts because of growing challenges from the vocal minority who see us as suspect.”

Thanks for joining the conversation below. Please keep your comments civil and respectful, and keep in mind the community guidelines, particularly those prohibiting hate speech and personal attacks.